Okay, so I’m freaking out, and it’s not because I had nightmares of Halloween decorations coming to life. It’s because I watched the “Old Friend” TV spot for Goosebumps 2: Haunted Halloween, and I saw this: 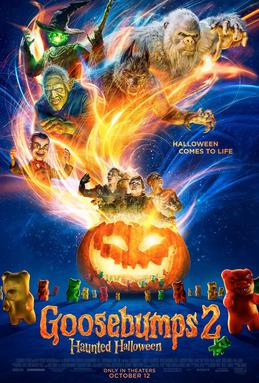 Yeah…I have a LOT of explaining myself to do. 😅 So initially, I wasn’t going to do a breakdown of the second trailer to the upcoming Goosebumps sequel, because let’s be honest – there wasn’t anything in there worth a whole post to discuss, other than more footage of the Gummy Bears, which you know by now I’m not the biggest fan of. But then came this TV spot, which of all places, it was revealed that Jack Black was indeed returning as R.L. Stine in what appears to be a glorified cameo. So I guess we got that really smart, if cruel way to deliver that final punch of excitement in an epic final trailer scene after all. Well, sort of.

It’s kind of weird that we’re only now getting this reveal though; I’m still calling Sony out for that. And what does it all mean for the film now that the good ol’ Master of Fright is back for a second cinematic go at children’s literature’s hallmark horror series?

This movie has certainly been a weirdly chilling trip, so let’s get to it!

As I said, this trailer has a lot of stuff that we’ve already seen, including footage from the first film, albeit to a lesser extent. I’ll just point out the few new scenes that we are shown though, before we get to the real interesting stuff. The first of these is when Sarah, Sonny and Sam are with what’s likely a friend of theirs, who confuses one of Stine’s monsters for a Halloween costume. Again, I’m not sure what this monster is even after yet another extensive search on the Goosebumps Wiki, but it’s definitely a witch of some sort with a head that’s made of…um…something.

Then we see a tower that is probably linked to Nikola Telsa, given that it appears to be giving off electricity, while Sarah is using a manuscript that is sucking back in a gigantic spider! 😁 Again, nothing terribly fits the bill for this one on the Wiki, but that doesn’t stop it from being cool.

Then the film’s logo appears, and…well…if you’re a fan of the Gummy Bears, then that’s fine. 😏 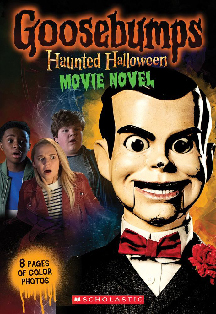 Now that I think about it, there might be a reason why there are so many unidentifiable monsters in this movie. Remember what I said about the Halloween decorations coming to life as shown in the first trailer? Well, I didn’t really look into it before, but that was before I came across the official novelization for the film. And the synopsis of the novel provides a really great explanation that makes a lot of sense. While a movie novelization isn’t meant to be a complete reflection of the film to prevent spoilers, it would make so much sense if the explanation in the book was also in the movie:

Sarah is tired of worrying about what her younger brother Sonny has gotten into. He’s always doing dangerous science experiments, and it’s up to her to keep him out of trouble.

When Sonny and his friend Sam find a ventriloquist dummy labeled, “Slappy” in an abandoned house, they decide to take him home. What they don’t realize is that they’ve brought him to life… and he’s evil. Whoops.

Slappy starts using his dark magic powers to make Halloween decorations come to life all across town – and they are not friendly! Even worse, he kidnaps Sarah and Sonny’s mom! Only Sarah, Sonny, and Sam can stop Slappy before it’s too late. But will he end up stopping them first?

So in addition to the monsters that are coming out of the Haunted Halloween manuscript, Slappy is bringing Halloween decorations to life. When you really think about it, the witch-like creatures do appear to be some sort of Halloween prop, and the giant spider could have been formed from what looks like balls or even balloons. And we can only hope that the Gummy Bears are of the same origin despite not exactly being associated with Halloween, and that they’re not trying to come up with titles for even more books that Stine never wrote. It’s a double threat that really increases the stakes, which would be quite something.

But anyway, the real interesting stuff!

Sigh…while I’m excited to finally see this, I’m disappointed at the same time, knowing that this could’ve and should’ve been the first trailer, or more realistically, a mix of the scenes from this TV spot with those from the actual first trailer. So in typical TV spot fashion, there is a music shift and a narrator talking about the movie, along with stuff that we’ve mostly already seen from the trailers. Then the narrator speaks of the children getting help from “an old friend”, who is, well…

Yes, R.L. Stine is in this movie, okay? It’s still kind of depressing that Dylan Minette’s Zach Cooper, Odeya Rush’s Hannah Stine and Ryan Lee’s Champ aren’t returning with him. But hey, at this point, I think we can all take what we can get. And from the looks of things, it appears that Black is going to deliver on this role yet again, but why wouldn’t he?

So How Is Stine In The Movie, And Why Only Reveal Him Now?

Its perplexing, honestly, but hey, perplexing is what these questionable film studios do best. While the film wasn’t affected by scheduling conflicts with The House With a Clock in Its Walls as badly as initially believed, it still affected the film to the point that Black is only returning in a glorified cameo, which is basically when a character gets roughly 15-20 minutes of screen time. With that little time, Stine will probably appear in the film when it matters, meaning the third act when the kids will need a last resort to stop Slappy. Because of this, Sony initially felt it wasn’t even worth it to reveal Stine’s return in any of the marketing, and chose to keep it a surprise until the film’s release.

Then the box office projections for the film were released, which clocked in (cue the pun) at $14 million for its opening weekend. Those numbers are atrocious compared to the $23 million the first film opened to, meaning that the film would definitely not out-gross its predecessor, and worse, possibly not even be a success. Hence, the TV spot dropped to let people know that they at least managed to get Black back, and that people should not be turning away from such a Sony-like movie. But here’s the thing: while surprise reveals of characters in a movie’s marketing such as this can be fun, it depends on the character that’s being revealed. Such reveals work way better for side characters that are just as big as the main character (think Spider-Man in Captain America: Civil War). Given how central of a character Stine is to these movies, even if his role this time was a glorified cameo, Sony still should’ve let us know that he was in the movie as early as the first trailer to prevent the numbers from being so low in the first place. And in order to prevent confusion that his role was just as big as the first film, they should’ve made it clear that the role was smaller to avoid disappointment. A TV spot may not spread the message of Stine’s inclusion as far as a trailer would, which may indicate that the damage has already been done. 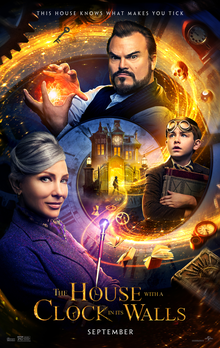 With all this being said, I’m kind of steamed with The House With a Clock in Its Walls for pretty much taking Black’s Stine from Silvertongue in the first place. I mean, Black was cast as Stine three years before he was cast as Jonathan Barnavelt. To prevent the scheduling conflicts, a different actor could’ve been cast as Barnavelt, rather than compromising a role that’s been around longer. And The House With a Clock in Its Walls seems to be a bigger deal than this movie, despite the fact that the book is not as known as the Goosebumps books. Sure, the movie wasn’t as well received as the first Goosebumps, but it will sure say a lot if the sequel’s outcome is ultimately inferior to the film that hindered it so badly.

So as this is the last post I’m making on this film before the critical response and weekend box office comes in, I’d like to end this post with this important statement. I don’t usually make my Goosebumps posts featured, but this is an exception, because it has to be heard. Unless it’s bad, please go see this movie if you’re considering doing so, because Silvertongue really needs the support. The man we all wanted to be in the film is in the movie, and I don’t want Sony’s mistakes to ultimately hinder the movie. If the film isn’t a success or is at least considered a disappointment, there is the possibility of saying goodbye to Goosebumps 3. I want to see a third film, and that unrealized HorrorLand adaptation. I want to see Silvertongue do well and become a distinguished studio, and turn a few Internet articles and a couple of conversations at 130 Mercer Street into 39 Clues, Spirit Animals and Clifford movies. I want K.A Applegate and Michael Grant to be impressed, and give them the greenlight for that Animorphs movie.

If the movie’s bad by any chance though, then that’s on Sony, not Silvertongue, and you can disregard everything I just said, because we shouldn’t support any form of entertainment with a bad story. And while the film was looking pretty good even without Stine’s inclusion, his involvement now ensures many things, including a tighter continuity with the first film. Sure, they’re still going to have to explain certain things, such as the absence of Zach, Hannah and Champ and how Stine (and the Lawn Gnomes) escaped Brent Green’s The Invisible Boy’s Revenge manuscript. But it’s without say that there is now more reason to see the film. Does the wait for the critical response scare me? Of course it does. But am I confident that the response will be positive? Of course I am. And besides, isn’t that what we do this time of year? To get scared?

And him, return for that bow, folks. 😏

View all posts by Tyler Naimoli

Children’s book writer and illustrator. In my spare time, I work on three different children’s chapter book series, multiple graphic novel series, a comic strip, and concepts for an edutainment franchise. Graduate of Parsons School of Design and The New School with a dual degree in Illustration / Journalism + Design. I look forward to publishing my first book!

You have a right to share my work, for as long as you ask for my permission and credit me. Plagiarism and hate (subjective criticism) will not be acceptable. If you would like to use my work in any way beyond simply sharing it, feel free to contact me; check the Contact page on my website for more information.

The top stop for all things Pop